Yes, I am drenched!

Camping and hiking in the rain and wind. Not exactly my idea of a good time. But, this is Patagonia in the springtime. To see the true nature of Torres del Paine National Park is to experience it with all your senses.

I write now from a comfy bed in a hotel in Punta Arenas on the Straits of Magellan, 24 hours after leaving the park.

The Paine Massif is not a part of the Andes Mountains but a separate group of massive granite peaks rising at sharp angles out of a relatively flat plain. The area features peaks, rivers, lakes, glaciers and abundant wildlife. Oh, and enough technical outdoor wear to clothe a small nation.

On day 1 we bussed from Puerto Natales to a campsite at Refugio Chileno. The Refugio offers bunk style accommodation and meals to both campers and bunk-room inhabitants. The plan was to dump our gear in our pre-erected tents then do a hike.

We should have taken it as a sign when the space between the mountains, where we should have seen a few 2600-2800 meter granite towers, was shrouded in a thick white fog. It was spitting with rain as we prepared to start walking but we proceeded on the chance that it could change.

We hoped to do an 8 hour, there and back, hike called the ‘Tower walk’. Few people were on the track and many had turned back when it became evident that it wasn’t going to clear. We walked uphill about an hour and a half and came to a crest where the wind was travelling at 80 kilometers an hour or more. It really was sad to have to turn back but we knew there was a ledge that had to be traversed and the thought of going off a cliff in high winds did not appeal. A disappointing start. Soaked and disheartened, and me with a sore knee, we headed back to the Refugio.

On the positive side, the Refugio offered a place to dry out by the fire and there was alcohol. We stayed indoors watching the clouds and mist covering the pointy towers from the safety of the fire. It was hard to drag ourselves outside to our tent on the other side of a very swollen river. The tent was barely big enough and not really level, so we spent a restless night on the ground and woke early.

Breakfast was at the Refugio and when Andrew went to ferry bags across the river he encountered two bridges pretty much washed away and a road that had to be forded in ankle-deep water. Fortunately, there was a swish resort nearby that must maintain a further road bridge for private vehicles. We were able to detour down stream a bit and get to the cozy Refugio for brekky.

On day 2 we took a shuttle bus and catamaran ride across Lago Pehoé to the campground at Refugio Paine Grand where we would spend the next two nights.

The scenery from the bus and ferry were both incredibly grand. This landscape is just so BIG! We saw wild Guanacos grazing on the open hillsides, sometimes lone bucks, and sometimes groups of females with young animals. The back side of some of the towers were visible even through the light misting rain.

The walk planned for the day was about 6 hours total, there and back, and followed a trail to look out on Lago Grey and Glacier Grey. It looked pretty miserable out and I decided that I didn’t want to get soaked again so I opted out of walking. Andrew went with the other walkers and from the safety of the Refugio I watched the towers cloud over and the rain come in pretty heavily as the day went on. Knowing his second pair of shoes would be getting soaked, I hoped his previous day’s hiking boots would be dry for day three and that he had the sense to turn back before ruining his leather shoes. He returned only slightly wet – fortunately the direction of the walk did not see the same rain as the side of the hill that I could see.

A few beers and dinner followed. The Paine Grande Refugio must have been skimping on power and the building was cold during the day, but with a hundred or so lively souls post-hike, it got cozy enough that the thought of two more windy nights in a tent on uneven ground was pretty depressing. Plus the toilet block was a long way off so additional sedative doses of alcohol would have only meant middle of the night dashes in the rain for a pee!

On day 3 we walked in the direction of French Valley. Two hours out and two back was all I wanted to attempt as my knee had given me a bit of trouble on day 1. The walk was along the shore of Lago Pehoé and the section we walked was gently undulating. Gusts of wind featured in a few spots and wildflowers were everywhere.

Sadly, a forest fire a few years ago had killed off many of the trees, but the scenery was still stunningly beautiful. We refilled our water bottles from streams and little waterfalls, sat on rocky outcrops and munched on dark chocolate, listened to the birds twittering away, smelled the clear mountain air, watched water funnels appear on the surface of the impossibly pale blue lake and admired the snow-covered granite peaks of the Paine Massif. This was the day of redemption for the two miserable ones we had experienced. The pictures tell it all. 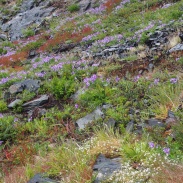 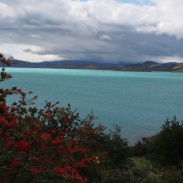 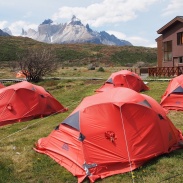